I’ve spent most of quarantine trapped in my house, feverishly editing a book about a woman who is also trapped in her house.

The heroine of my book – a person whose given name is Christina, but who has renamed herself, in a fit of vainglory, Patina – is an aspiring fantasy novelist. The reason she’s trapped is that she’s acquired a certain horror of faces. She doesn’t want to see herself reflected in others’ pitying gazes – she’s aware, deep down, that she’s become something of an art monster, that she’s pushed people close to her away, focused as she is entirely on becoming famous. She believes that if she can just write the right words, the world will sweep in and sweep her up, into an echelon of importance, a place she’s long deserved.

I’m old enough now to know that the world doesn’t work that way. I wasn’t, back when I started; when I began this book, back in 2011, I was closer to the age of her antagonist, the bus driver who’s come to Patina’s town to sleep with her husband, a handsome but feckless elementary school principal.

Back then, I was writing a book simply to see if I could write a book. I was also writing it as a form of escape, because when I was writing the man I was dating let me leave the house; that was an acceptable exit, for him (though leaving to see friends or call my family in private? That was iffy). I was writing it because I didn’t know what I was, at 21, and I was afraid I was becoming something like Patina, the woman who spends her days drinking coffee-liqueur and then wine and creating horrible messes that her husband has to clean up. The man I was dating told me I should be afraid of that, of becoming someone like her.

Fiction is funny, isn’t it? It’s just a temporary gateway. When we look up from our words, we are still where we were when we sat down.

Where I was, when I started this book, back when I didn’t know what I was doing, was the Staatsbibliothek in Munich. I’m glad it entered the world in such a grand place. The StaaBi was built in 1832, was mostly destroyed during World War II, and was then (like all buildings in Munich’s downtown) painstakingly recreated out of its own rubble. 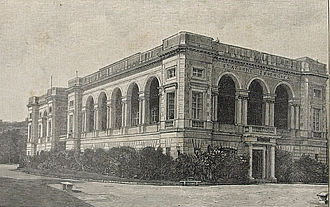 This is, I’d know later, sort of like the process of writing a novel, a thing that’s also destroyed and then rebuilt. Again, I didn’t know it at the time.

To begin a novel at the Staabi – a grand afternoon’s undertaking that necessitated many excuses, all chores done before I went – I biked there with my netbook in my bag, a crappy little thing (my then-boyfriend had commandeered my laptop, because he needed it more), locked my bike outside, and proceeded into a central entrance hall. There, it was rather like visiting a courtroom; I remember I placed my backpack’s contents on a belt, gave up the backpack itself, and was given everything I needed in a clear plastic bag. This is, I think, to prevent book theft. (Some 500,000 volumes were lost in the war; probably the ones left are very precious.)

It was filled, of course, with students, since it was right across from the university where I’d been a student the year before. Now, I was just a person, a nanny on her day off. I had a netbook and some free hours. I sat down at a desk, and I remember my view looked something like this.

It was grand and European and I had no Internet and nowhere to be. All around me, people flipped pages and hissed hushed German whispers.

I should rightfully, deciding to start a book, have written something about where I was – about the war, about the recreated building, about the many strangenesses of living in Munich. Instead, I opened a page and began to type about home.

My character, in that early draft, took her son’s hand (he was much younger then) and walked down her long winding driveway, which was, I realized, my aunt and uncle’s old driveway at their house in Stillwater; she stood alongside a familiar straight Midwestern road with a name like 170th; she waited for a classic American school bus to arrive. When it did, its doors opened to reveal not the crusty bus driver she’d learned to expect, but a smiling young woman with glossy brown-black hair and nervous lips. Her son looked at her with trepidation.

Huh, I thought, sitting back.

The wayward elementary school principal, in my book, is obsessed with determinism. For him, things can only go as they have gone. He is fated to have met his mad wife, fated to have later met the mistress who will drive his son into an accident. I’m not sure he’s right, but it’s how he thinks, and it will hurt him in the end.

I started the book, that day. The next day, I kept going. All that year, I added sentences to it, trying my best not to write a perfect book, but to write any book at all. It was saving me, in its way. When I was in my book I was not where I was.

It’s no wonder that it ended up being a novel about the pale consolations of fantasy novels themselves. Patina is an adult who was a child like I was; we dreamed of the same fairy-tale empress. I called her Jezilani (because Jessie) and she called her Tirosa (a combination of her name and her best friend’s name), but both of us sat in math class and thought about the empress who didn’t want to get married.

The difference between me and Patina is that she married the wrong man. Her principal husband has spent his life appeasing her. He’s a person like I was, for a while – someone who refuses and refuses to see that they’re in bed with a bully, someone determined to add them up to a better character than they actually are.

Like me, Mark sidles out. I did it through fiction – writing and writing, moving on to other stories, sending those stories in an application that would end in an astonishing whisk, an escape, grad school across the ocean, my boyfriend’s sneering voice reduced first to a face on a monitor and then to nothing at all – and Mark does it by dating the bus driver, Claire.

Claire is, unfortunately, afflicted with a condition that’s got a name in German: Fernweh. The direct translation, awaysickness, became the title of the book, though it was years before I heard the German word. (For quite a long time, the novel was called The Woman Who Drives Our Son to School. Not great.) It means, quite simply, that her whole life long she hasn’t wanted to be where she is. She’s always dreaming of an elsewhere, though hers isn’t the mossy brooks and ancient trees of Patina’s land, but somewhere less corporeal, less tangible. She just wants out and has always wanted out.

By the end of the book, of course, she gets there – and Patina, obsessed with this girl who looks so very much like her fairy-tale empress, does her part to help.

I sometimes joke that this book has become my Horcrux. I’ve written others since I started it all those nine years ago – the story collection that would become my thesis at Iowa, the fun-but-uneven imagined tales of the ultra-ultra-ultra rich – but Awaysickness holds a lot of my fears and hopes within it. Even when I put it aside, as I’ve done multiple times over the years, I can still feel its characters living inside my brain.

I’ve been pleased to find that quarantine hasn’t made me into a Patina, someone who keeps starting documents but turns away in favor of sipping coffee-liqueur, dancing to Bowie, and staring out the window, mourning her lost dreams. (If this is you, that is completely okay. These are terrifying times and all we’ve got to do is stay inside and stay alive, for the present.) After a week of dithering, I turned methodical about editing. I ripped out scenes, wrote the ones that remained down on notecards, making sure they had both a plot and an emotional point (thanks, Ethan Canin); I started to read it out loud at our weekly live-stream shows, a chapter or so per week.

In quarantine, in a pandemic, I’m so much more physically trapped than I ever was in Munich, back when I was in theory free to bike around the city and sit at coffee shops under wooly blankets and buy flowers at the giant farmer’s market.

But I’ve been able to find, in editing and rewriting, an escape. And what’s more: when I walk out of my office every day, the person waiting for me is someone who tells me, over and over again, that I am not a monster, that I am going to make it, that we are going to make it. He isn’t just saying this; he has facts to cite. “Look at how hard you work!” he tells me. “People are going to love this book.”

We’ve made it through, the book and me and all the people in it. Yesterday I sent it to agents. Two of them are reading it now, and more may be on their way. The book that saved me might yet become a real physical thing, a little gateway to Elsewhere, a fantasy about fantasies, about going til we’re in a better land, even if our bodies are as here as ever.