In one episode of 30 Rock, Liz Lemon is annoyed. Well, actually, in many episodes, but for whatever reason, this particular day, she especially isn’t having it, the jostling crowd on the streets of New York. She’s trying to buy a hot dog, standing in line, when all at once a runner darts past her, bumping her elbow. Liz flings up her hands and shouts after him: “Oh, look at me! I’m going to run around in circles so I live longer!!”

It’s a very good line. I have stolen it often, every time I’m walking around Lake Harriet and someone puffs past, checking their pedometer as they sweat gloomily toward an imaginary finish line.

Running is so earnest, so German, I thought. Why do it? What’s the point?

In elementary school we were all made to run The Mile, a day I dreaded – I was always the last to finish, jogging in my plaid uniform toward the knot of relaxed, mocking boys who’d already completed it. And then there was the school marathon. My mother remembers it differently: “Why, you just kept going and going!” she has said eagerly. “I think you could be a real long-distance runner if you wanted to!”

No, Mom, I always thought. There was the cold taste of spit in my mouth, the stitch in my side, something I was sure nobody else felt – I’d kept going and going only because I thought you had to, that we’d somehow miss points on the assignment if we gave up and walked. I was a very rule-oriented child and me finishing the mini-marathon was only a mark of my goodness, not proof of some latent desire to grow up and become a jogger. Running, I knew, was for everyone else – people who were somehow fundamentally suited for it in a way that I wasn’t.

It was like at Iowa. I remember looking around at all these real novelists, people who could paint a scene with adequate detail, who rose every day to work hard while I was – who knows – goofing around at the bar or rewatching the same 30 Rocks I’d seen a dozen times. My stories were slapdash, completed in a day. My book – the same one I am still working on these five years later – was a mere silly vanity project that I’d started while I was bored in Germany. It wasn’t a real novel and I wasn’t a real writer. It was a miracle that they’d let me in.

Last Monday, I went in for a haircut and surprised myself.

“Asymmetrical.” I pointed. “Well, not quite like yours, but longer on one side than the other.”

Radical. What a scary word.

But the length of it – how could I go on any longer?

My mother had warned me about this, back when I’d seen a picture of her with long braids and moaned the same thing – why, whyever did you cut it? She said that our hair, Gwost hair, Polish farm-wife hair, was especially massive, and that without hers, she’d felt free. I snorted, certain that when I had waist-length hair of my own, I would appreciate it adequately. 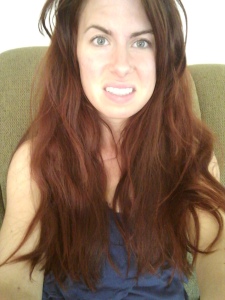 The thing was, all last year and the year before – I didn’t. I abused it, I didn’t deep-condition, I didn’t brush it enough. On good days it was, yes, lovely, the sort of medieval-princess hair I always wanted. But on bad days, I looked in the mirror and saw an insane witch. It tangled in my armpits, got wedged in every crevice. All hairstyles eventually descended into a shapeless bun, the heavy mass of it banging against my neck as I walked. The best-case scenario for exercise was two braids, not unlike the ones that my mother had worn in that photo, but even then, when I tried to run – and I did try, I kept hoping that it was someday going to work for me, and then I would be like everyone else, the fit humans dodging through crowds – it bobbed with every step, a reminder that I was filled with a unique gravity I could never quite escape.

The stylist braided, pulling from her pocket elastic binders. One snapped. She chuckled. “You’ve got a lot.” She pulled forward a braid. “This is about the amount I’d take off one human, and you’ve got three of them.”

“Are you going to give it to someone else?”

“Yes!” she said, giddy. “If we take eight inches, that’s enough for the donation bin.”

I think if she hadn’t said that, I might have chickened out, changed my mind and walked out of there looking pretty much like I had before, only $50 poorer. But the thought that my haircut would be useful in some way – that was enough to say, “Hey, all right. Let’s do it.”

And so she did.

The snick of the scissors on my neck, the lightening, it felt like – like leaping off a rock into uncertain currents. I told myself the same things people always tell themselves – it’s only hair, it’ll grow back, this is something you’ve wanted for a while, but they were useless, who cared? It was cut, and now I had no choice but to let her continue.

Last week, long-haired, I went for a walk. In jogging clothes, yes, but I knew I was not intending to jog, more just meander, the same as always. Because it was almost certain that I could not jog, that I would disappoint myself the same way I always did, and so why try?

And then, when I reached Minnehaha Creek, the wind started to blow –

And then, as I rounded the corner into the very nice neighborhood, it started to rain. Big cold drops, cheerfully malicious, larger than any I’d ever felt before.

I realized I had two choices. I could stick around and get soaked. Or I could hightail it.

So I started to run. And my two braids were hitting me in the collarbones, and my steps were not very long, and my thighs were thumping up and down, but I had a goal – I had to make it back before I was as sodden as an Austen heroine.

It was surprising how easy this was when you were fleeing something. I kept going and going. Usually in my attempts I made it only two blocks before slowing to wander and look at stuff, but now the rain was driving me, and I wasn’t even winded when I walked up to our front steps. I am, it turns out, surprisingly fit from all the walking.

I could have done this all along, I thought, if only I had realized it.

I think the haircut was born in that moment. It was something other people had told me not to do, that my hair was so beautiful, that it was so long, that if you could grow hair like that, you had to. It was a limit, just like the ones I’d set for myself, saying you can only run two blocks, why try to do more?

And then – when I had a reason, the cold driving rain, the giddiness of escaping it – I found that I could.

Yesterday, newly shorn, I set off on another run, my hair in a stubby Ned Stark ponytail. I had intended to go only to the rose gardens and back, but when I reached the lake, I thought – why don’t I go around all of it?

I did not make it, not quite. By my calculations, though, I ran three whole miles. (My limbs could have gone on for longer, but I was feeling pretty nauseous and thought I should stop before I puked on someone’s nice lawn.) Shorn, it was so much easier. I wasn’t negotiating a bun or feeling the thomp of the braids. I could legitimately enjoy the wind without seeing it as an annoyance that would loose tangles that would then get in my eyes. I darted around families, passed walkers, looked at lovely yellow birches and rust-tinged oaks.

Look at me, I thought. I’m running around in circles so I can live longer.

One response to “On Going Fast”