Two days ago, the bomb inside my body exploded. I was lying in bed wiping quiet-book-reader tears away (the ending of The Language of Flowers!) when it happened – like Ms. Clavel attending Madeline, I became aware that something – something in my gut, directly beneath the spine of the book – something was not right at all.

Because I am a woman, I began immediately to brush it off. Oh, I thought, it must be the fact that I ate pizza and whiskey for dinner, and now they’re combining in my belly like a baking-soda volcano to produce – whatever this is. Possibly it is guilt – I was, on a few occasions, quite short with my co-workers during the drive, and maybe the stress of it is just now hitting me. Or maybe it was the new surroundings; we were on a work trip to Albert Lea, and I was occupying a strange and beautiful downstairs bedroom in a house on the lake, a room full of someone else’s clothes and a silky pink comforter and a dug-out window. I was well aware that it was not a good place to be sick.

But sick I was, and sick I continued to be. Punishment, it felt like, but for what? I escaped to the bathroom, thinking I’d just sit on the rug and read for a while. Nothing emerged from my body, though it seemed like it wanted to; there was only me, and pain, and time. A frantic search through the couple’s cabinets yielded no painkillers, only washcloths, and at two-thirty I found myself sobbing in child’s pose on their fluffy rug, Garrison Keillor’s Lake Wobegon Days abandoned beside my knees. Death seemed like an easy solution.

It did not come for me, though; only a weird half-sleep, interrupted by the emergence of shooting pains in my shoulderblades. At eight-thirty, I rose from the strange bed, grabbing a flannel shirt and my purse. The kind host couple was waiting in the kitchen, eager to bake us banana bread and hear about the DFL’s plans for the region – they did not expect a haggard wretch to crawl around the corner and moan, “I MAYBE I GUESS NEED TO GO TO THE HOSPITAL.”

“I had migraines for three months last winter,” said the man. “Makes you want to shoot yourself, all right.”

He pulled up to the hospital, which was all of two blocks away – how like me to forget that we’d passed it last night, that it was so close, how like me to demand to be driven. “Well, here we are. Maybe you can walk back when you’re done?”

I had no doubt that I would be finished soon. Certainly this would be like all the other times I was convinced I was dying – just gas, just menstrual pains, just whatever. At twenty-seven, I know myself well enough to know that I have a tendency toward hyperbole unusual in a Minnesotan. Nothing is ever as bad as I make it out to be. I’ve gotten used to that fact, and have tried to lower my expectations accordingly. It is just that it’s much easier when I’m in the company of others, rather than alone in a bathroom at two-thirty in the morning.

Kind host left behind, I walked crookedly and sweaty-faced into the ER, where the receptionist looked at me and asked if I was having an anxiety attack, and I thought: why, heavens, maybe I am. Maybe if I go upstairs to Urgent Care I’ll just calm down enough that they can tell me it’s gas. Save myself the bill. Frugal patient, that’s me.

An hour and a half later, when my name was finally called, the Urgent Care nurse said: “Oh, God, you have pain in your shoulders?” and wheeled me back down to the ER, where I got to exchange glances with that receptionist that said, see, ma’am, I really AM sick, the wheelchair proves it.

Only when they stuck a drip in my arm and announced the CT scan did I start to think – why, heavens, maybe I was right. 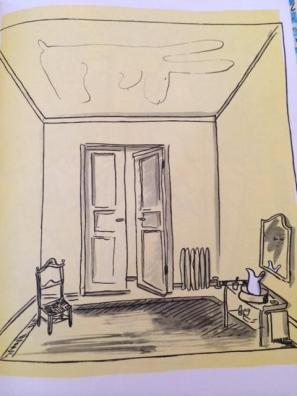 A cyst on one of my ovaries had ruptured. Apparently they do this for no reason and at any time; I’m only grateful it occurred when I wasn’t driving the van (my job this summer has been to transport DFL door-knockers to locations across the state – there are way worse times for it to have happened). But my rupture was bad enough to cause internal bleeding, which was why my belly had been poofy and painful – and that meant laproscopic surgery. Three slits and a camera in my inflated abdomen. Anesthesia, the whole works. Who knew?

If I hadn’t come in, there’s a chance that I would have been just fine. But as the badass blonde gynecologist explained, there was an equally likely chance that the bleeding would have continued and continued until my insides were very – she paused – messed up. “And then we’d have to do some cleanup.”

It was bad, yes, but it wasn’t my fault, and I’d done the right thing by coming in. How strange and beautiful.

We’re moving next week. What with the oozing slits in my belly, this could not have happened at a worse time, but we have friends and helpful fathers who will migrate our stuff 20 blocks south in a U-haul, so I’m pretty confident it’ll be okay. Plus the new apartment is gorgeous – a quarter of a tree-lined building with good heat and nice high windows, bare wood floors and a relaxing kitchen, small tiles in the bathroom, a clawfoot tub. It’s a place where real adults live. There’s room for my big desk and for my roommate’s animation studio. We’ll have to get rid of some of our clothes, but that’s probably a good thing for all considered.

Still, I will always have a fondness for where we live presently. It’s a weird place; my neighbor, a man-bunned skateboarder named Peaches, explains that a lot of drug deals go down outside, as it’s just a few blocks off Lyndale and 94. Prince lived down the street in the 80s; the apartment is aware of its Uptowniness, and is accordingly shitty, with a ceiling that actually fell down once, radiators that clank, and walls that are pretty much useless as noise filters. (Sorry, Aaron.)

I have spent a lot of anxious nights in this apartment – a lot of time trying to convince myself that it isn’t as bad as I think it will be, and then turning around to find out, no, it’s worse.

I’ve written a lot of pages, most of it awful. I’ve drank a lot of wine.

I’ve entertained a lot of guests – two serious-ish boyfriends, both of whom left, and some romantic ephemera.

I’ve not cooked very much. I’ve badly misused my roommates’ Tupperware. I’ve procrastinated on laundry until the basket tips over.

And I’ve thought, over and over again, that this is not a real life, this is not how real adults live, look at everyone on Facebook with their families and bachelorette parties and wholesome hiking trips. I’m aware that there’s a phrase for this thinking, but it doesn’t help in the moment, when I wake up to my laundry glowering at me, and then – when I rise – my own face.

Because that’s the thing about this apartment: it’s covered in mirrors. A trick to make it look bigger, no doubt, but a cruel one, because there are just so many opportunities to stare yourself in your eyes. Directly when you wake; just before you leave the house; midway down the stairs, you can whirl for a final reflection. Who am I, this apartment asks a person continually, and who do I like, and how do I look?

And the miracle of this is that – in this weird, often-awful year – I’ve found some answers.

When they did the CT scan, I wanted to ask to see it – maybe they could point it out, maybe I could literally see my prefrontal cortex developing. Because I can feel it fusing shut, the thing that was supposed to fuse in my mid-twenties and make me a better decision-maker, a better listener. It’s happening. I’m learning. It’s taking a while, but I’m figuring it out. I know something I didn’t before – something hard to put into words – something I didn’t expect to know, before, but now I do, and now it’s time to move on and to learn the next thing.

In other words: I’ve learned to trust my gut, even when it’s exploding.

Sorry for the pun. I guess I’m more prone to stupid wordplay when I’m this grateful to be alive.