September thru November: The Barn

Every so often you meet people who are possessed of an ethereal kindness. It’s not kindness that wants to get something out of you or impress you with its existence – it’s something more basic than that, a part of their essential nature. They are like animals, they couldn’t change it if they tried.

My friend Jeanne would not resent being compared to an animal. On the contrary, really; I’m pretty sure she’d find it more flattering than being compared to any person. Jeanne loves animals, but not in the goopy Lisa Frank sort of way. No, Jeanne’s love for animals is the sort of love that thinks nothing of waking up at dawn each day to feed a herd of thirteen-plus hoofed beasts, most of which have come from shady situations and are doing just fine now, thanks.

I don’t know when I first met Jeanne. It seems my mother has always spoken of her in the same misty, worshipful way, though I know at one point they were not as close as they are now – they met through my aunt, who is also named Jeanne. I suppose Aunt Jeanne was like, “Mary Ann, you like horses and Jeanne has horses, go hang out with her,” and the friendship commenced. Finally when I was in college I went out to visit too. And then, last year, after I worked at the State Fair, I moved out to live with her.

Jeanne’s farm is technically in the hamlet of Marine on St. Croix. Though she’s been there for twenty-some years, the other villagers still think she’s new in town; it’s just that kind of hamlet. Marine is ten miles north of Stillwater, Minnesota, itself a very twee border town. Marine is even twee-er. It has six hundred residents, a general store, a gas station, a coffee shop and a pub. It looks decently like the town in the movie Big Fish, the one with all the shoes slung over the telephone line.

To add to the general magic of the place, there’s the fact that to reach her home, you pretty much drive through the suburbs, and stop when you hear donkeys.

Behind acres of restored prairie, the place unfolds itself. The pasture – the two brown horses – the white horse – the barn. Apart from occasional garter snakes that like to hang out on the road, the place is heaven on earth, if you’re into that sort of heaven.

The Volkswagen Beetle, and the corner, with the glowy windows? That’s an apartment. That was me. Working on my novel, more or less, when I wasn’t watching Mad Men or attempting to slow-cook an entire turkey. (A lesson learned the hard way: though the turkey worked, later that night I heard coyotes howling outside my window.)

It was, by and large, a glorious autumn. I was really excited to live here – for the obvious reasons, yes, but also to figure out just how she does it. As a lifelong horse aficionado, I’ve seen a lot of barns. Jeanne’s is far and away the cleanest and most efficient. (“Oh, my mother. She’s just so,” she said to my mom and me over tea. “Everything in its place, no dust left un-swept. It’s impossible!” She laughed, and swept away some invisible crumbs from the dining table.) Every bucket is poised for action. No poop stays down for long. Because Jeanne has a herd to feed, all by herself – and, she tells visitors gravely, every mistake can be costly.

“Oh, the worst thing is when the donkeys escape. They run and run and there’s no telling when they’ll come back.” She explains: though the donkeys are generally slothful and chubby, they become excited in the presence of unusual grasses, and tend to resist capture.

Preparing for my days in charge of the farm, I was taking mental notes. “What about the goats?”

“Oh, the goats. The problem with them is getting them outside!” She laughed. Since she bottle-fed them herself when they were abandoned as kids, they’ve formed an unhealthy attachment to her and have to be practically forced outside. Every morning, she lures them outside with grain, and then they just stand there, staring into the barn until they lose hope. If left out until afternoon, they’ll wander up to the house and peer into her windows. Once she left a bag of groceries in the garage; they found and ate an entire thing of celery within minutes.

Jeanne’s barn began as a horse operation. When I first moved into the apartment, the walls were hung with photos of Jeanne and her children cleaning up at shows. Glossy ribbons, high top hats, etc. Its stalls are pristine and its aisles wide.

However, over the years it’s become less of a place for medal-winners and more of a place for animals that have nowhere else to go. Jeanne’s animals come to her through the Minnesota Hooved Animal Rescue Foundation. They’re hurt and broken in some way, but once they’re there, she keeps them until they die. Though she’s said good-bye to many animals over the years, I can tell it hurts just as much now as it did the first time. She still speaks longingly of her sheep, an aged creature who lived out in the back paddock; she loved that sheep so much that she bought it two llamas to keep it company. Now the sheep is gone but the llamas remain, crunching hay and freaking out visitors. 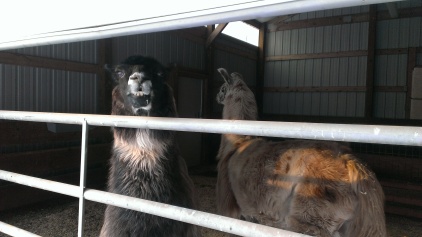 There are also three tough miniature horses and one pony.

She does have three full-size horses still. Ella is the oldest; she too is free-range, wandering the house and grounds at her leisure. Her teeth are not what they used to be so she just eats giant buckets of grain and cubes instead of loose hay. When I lived there, we had a lot of conversations, mostly one-sided, mostly me telling her how pretty she was. Also once I put up a hammock between two trees, which badly unnerved her, so we had to hash that out too. By and large she was a good roommate, though she did on occasion take it upon herself to peer into my windows.

The other two horses were sort of a package deal. Sunny was part of a trailer-full of rescued, stick-thin animals that the (previous, terrible) owner swore were all geldings. It turned out he was wrong about at least two of them: one mustang was a stallion, and one mare was pregnant. As a leaving present, I wrote Jeanne a book of limericks about her animals. Sunny’s is, I think, the best:

There once was a mare, name of Sunny,

Whose tummy, it looked sort of funny.

Then out came a baby.

Two horses, and for no more money!

I have no photos of Sunny and her baby Luna, because Luna is in constant motion and sort of a delightful terror. She’s super-smart, determined to be in charge of any and all situations. Jeanne is beyond fond of her.

Our deal was that I’d live in the barn and work on my novel; in return, I’d take care of the animals during the four days that Jeanne was in Washington visiting her grandkids. I thought, no problem. I’d owned my own horse for seven years, I’d been helping with chores for two months, I had the routine down. What could go wrong?

The first two days were fine. Lonely, yes, but a companionable sort – it’s really difficult to achieve actual loneliness when there are two donkeys outside your window, braying hopefully every time they see motion in your apartment. I did get tired very quickly, soon appreciating what an insane amount of work it is to feed thirteen animals every day; of course I’d been helping, but helping meant doing only half the work, with the opportunity to tap out whenever I wanted. Here it was all me, all the time. My call.

And then, one afternoon, it rained.

It was a November rain, like that Guns N’ Roses song. It was icy, and sleet-y, and oh my God: frail Ella was outside, shivering in her blanket, and Sunny and Luna were running back and forth in their pens…

What do I do? I thought as the cold rain drummed on the steel roof. I’m not trained for this! Jeanne never said –

Okay. Use your brain. You have a master’s degree, for God’s sake. Their pen was only twenty feet or so from the barn entrance and indoor arena. I knew that usually Jeanne let old Ella roam around inside there if it was particularly cold – why not let all three of them do it? No: if they were all in the same pen, Luna would bite Ella.

So I brought Luna in and put her in her stall, then let Ella and Sunny roam around.

This was intolerable to Luna. She kicked the stall repeatedly, bellowing to be let out, freaking out all the other animals.

“Fine,” I told her, “enjoy your freedom!” I released her and put Ella in her stall instead. Ella neighed sadly, and Luna started running in circles around the arena, thrilled to be free in a new environment, pausing to aim kicks at Ella’s stall.

I was reminded of the time I accidentally left the feed door open and the goats busted in to eat themselves sick on grain. I was reminded of how badly my novel was going. I felt like an utter disappointment –

And then I realized the rain had stopped.

Later, when I told Jeanne what happened – “It was like that riddle with the fox and the goose and the grain, you know?”- she laughed and was like, “Well, I knew you’d figure it out.”

“Why didn’t I just call you?” I wondered.

She said something like, “I knew you had a good head on your shoulders.” I didn’t believe it, but it helped.

In my few months there, I learned once again that I am prone to stupid mistakes – but not as prone as I once believed I was. And what’s more, I’m not alone in this; Jeanne, though everything is mostly just-so for her, will willfully admit the times she’s screwed up and wreaked animal havoc. Yet she keeps doing it every day, waking with the sun and releasing these hoofed beasts out into the world through an elaborate system of gates all her own. It’s a kind of magic, this white-haired ethereal witch woman and the animals that follow her – and though I am not old enough yet to appreciate it as something I’d like to acquire for myself, this pleasant stasis, this series of tasks, I really did enjoy staying there for three months. There’s something to wanting a good thing and just making it happen – to being the place you want to see in the world.